Firelands is finally behind us, the Hour of Twilight is at hand! As usual, Majik and Kurn share their take on the new patch, although be warned that what they think is interesting about your class PROBABLY ISN’T, so go check out the actual patch notes!

We also did a livestream of the recording process, which meant that we got to interact with some awesome people in the chatroom while we did the show. Keep an eye on Twitter, we’ll announce if we’re livestreaming next week. If we are, here’s the URL: http://www.livestream.com/majikpugs

The Daily Blink on Symbiosis: http://www.thedailyblink.com/2011/11/the-new-abilities-symbiosis/

And now, the poll about Majik’s next character to level:

And Alfimi sent us A SAD MOOSE. BRILLIANT. 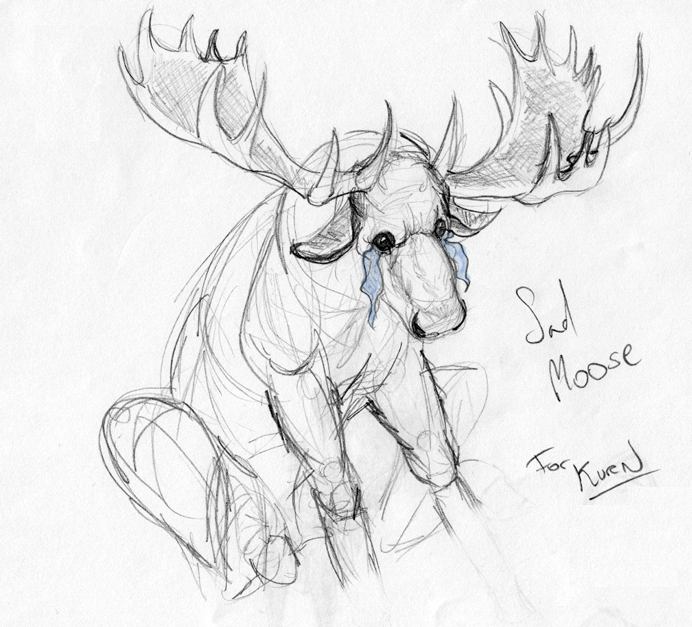 AND, a last-minute submission from Alfimi gives us our very own SAD PANDA! 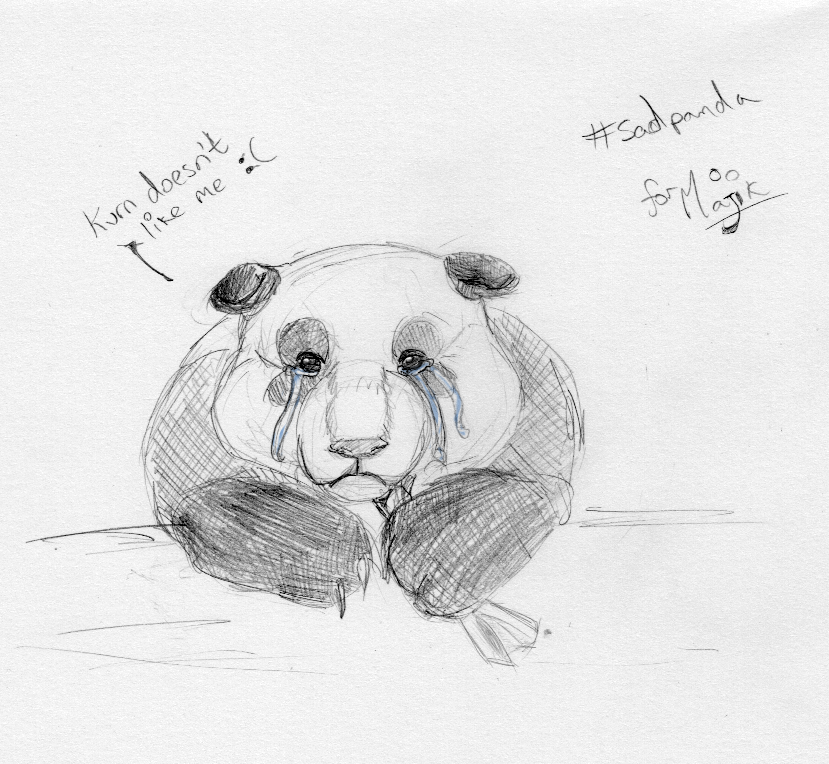 Alfimi, you are amazing and we love you. Thank you so much!!

Are you a ret paladin? Looking for a guild? Check out our guild, Apotheosis! http://www.apotheosis-now.com/main/

The old WoW Cartography maps that Kurn would spend hours gazing at:

Kurn will be on the Twisted Nether Blogcast on Saturday, December 3rd, at 11pm ET/8pm PT: http://www.twistednether.net/

Speaking of Twitter, thanks to the following people for chiming in about what they’re most looking forward to in 4.3:

@stoppableforce: Transmogrification, pretty much hands-down my most anticipated feature.
@mageic: looking forward to new stuff, just feeling a bit stale currently, so new things to do will be fun
@matticus: New raid content. Done with Firelands.
@psynister: The new DMF and reduced exp requirements to get through OL/NR.
@BeruHeals: MOAR BOSSES TO BLOODLUST!
@Velystia: Transmog, new dungeons, new raid… a reason to log in again. 🙂
@MathiasSchnell: The Fangs of The Father questline and rewards! 😀
@DuridJaymz: Looking forward to… hmmm… Actual “difficulty” and “choice” in the feral rotation!!!
@hestiahdruid: Transmogging gear, and kicking Deathing’s ass.
@kenakabones: 4.3 – transmog, new 5 mans *they’re fun* and dragon soul!
@Kamilla_of_ET: my wings!!! I can’t wait to have my wings again hehee 🙂 yay for T6!

Please do follow us on Twitter as well! @kurnmogh and @Majjity for us and then @ApotheosisET for our guild.

Ladies and gentlemen, one year ago, we embarked upon a crazy adventure that has led to a lot of laughter, some bleeped profanity, many late nights, a few early mornings and, well, a LOT of time talking about WoW together and with various guests.

Episode 42 is our one-year anniversary episode and it is totally packed with awesome and clocks in over two hours in length, but it’s absolutely worth it. Why’s that? It’s because we contacted some of our guests from our most-downloaded episodes and somehow convinced three of them to make their returns to the show!

Beruthiel – You know her as the raid leader of the Horde guild Monolith (US-Llane) and the resto druid blogger behind Falling Leaves and Wings. She’s also on Twitter as @BeruHeals. She was previously on Blessing of Frost for Episode 23 – Legislation for a Legendary. (She may also now be nicknamed “Bloodlust”…)

Stoneybaby – Known primarily for being the guild master of the Horde guild Big Crits (US-Sen’jin) and the creator/producer of the Big Crits web series, Stoney was last with us on Episode 11 – Progression Pointers. He can also be found on Twitter as @stoneybaby.

Vidyala – Guild master of the Alliance guild Business Time (US-Moonrunner), Vid is also known as the Pugging Pally and the blogger behind the blog Manalicious. She was a guest with us for Episode 13 – 10s vs. 25s (and was also a guest with Kurn for Episode 13 of My Epic Heals!). Most recently, she’s been busy releasing new comics over at From Draenor With Love every Wednesday. You can find her as @_vidyala on Twitter.

Here’s a link related to Episode 40 – The Corpsegrinder Controversy, shared with us by Luke, who sent us a great email for our MOLL-E segment. This link offers a compelling (and very personal) argument as to why homophobic language should not be tolerated. Please consider yourselves warned, it may have potential triggers for some readers. http://vorpalbunnyranch.wordpress.com/

Apotheosis of Eldre’Thalas is a 25-man 6/7 HM Alliance guild and seeking a retribution paladin and a hunter, so check us out and apply now!

Monolith, a 25-man 7/7 HM Horde guild on the US-Llane server, is seeking a DPS death knight.

#sadmoose shoutouts! A bunch of people tweeted us with the #sadmoose hashtag and got shoutouts on the show. Here they are on twitter — follow them! 🙂

And we also got a tweet after we recorded the show:

@badtauren: was a #sadmoose till I found BoF on stitcher. Its about time yay!

And @DSatt57 sent us a Tip of the Week! “When doing the Harvest Week quests the first day, get 25 of each main ingredient. Start in SW, go to IF, back to SW, then Darn.”

Please do follow us on Twitter as well! @kurnmogh and @Majjity for us and then @ApotheosisET for our guild.

Once again, thank you to all our listeners for your support, interest and interaction with us over the last year. Without you, we probably would have given up on this nutty idea back around Episode 6. We hope you’ll stick around for many more episodes to come!

Welcome to Episode 41 of Blessing of Frost! This week, our topic is Heroic Ragnaros. With just 2.5% of Firelands raiding guilds at 7/7 HM (according to guildox.com as of this recording), does this constitute a problem? What about the fight itself, are the mechanics just that challenging? Majik and Kurn explore the concept and design of Heroic Ragnaros this week.

Of course, we’re not the only ones talking about this. Last week, Lore from TankSpot addressed the issue in Episode 107 of The Weekly Marmot.

Beruthiel, of the guild Monolith on the Llane server, who was our guest here for Episode 23 of Blessing of Frost, posted her thoughts about Heroic Ragnaros in late October on her blog, in a post called “Are 400 Pull Kills Good Design? Are They Fun?“. It was talked about over at MMO Melting Pot as well (read the comments on both posts! @Pliers1 makes some great points on the MMO Melting Pot article) and Borsk (who raids with Beru) posted a response blog about it as well.

Beru’s guild got Rag down last week, so she and Borsk both had things to say.

So, what are your thoughts on Heroic Ragnaros? We’d love to hear what you have to say.

@kurnmogh and @Majjity for us and then @ApotheosisET for our guild. And don’t forget to check out Majik’s blog: Majik’s Missives — he’s got a few posts up already and enjoys comments. 🙂

Also, please rate us up on iTunes and leave us a review!

That’s right, folks, Episode 40 of Blessing of Frost is here (albeit a few days late!) and we tackle the once-current topic of Corpsegrinder’s homophobic rant that was played at BlizzCon 2011.

Next, the full video in question: http://www.youtube.com/watch?v=cW_Lv0r-l4c (NOT SAFE FOR WORK!) Note that the contents of this video are not condoned by Kurn and Majik. We do not approve of this kind of language and are merely linking it so that you have context.

A variety of blog posts on the subject from MMO Melting Pot: http://www.mmomeltingpot.com/2011/10/the-homophobic-corpsegrinder-rant-at-blizzcon-explodes

We want to hear what you have to say! We want to include your stuff in our brand-new MOLL-E segment! Send us your thoughts, mp3s, bumpers, tips, whatever! Our address is:

Also, please rate us up on iTunes and  leave us a review!

So we didn’t record last week because Majik had no power. He was fine, though, no need for concern. 🙂

This week, we’re not recording tonight because Majik has no voice. He caught a cold and was actually unable to talk on Mumble during our raid last night. He actually took to threatening me in raid chat because I was mocking him and he couldn’t use his voice.

That said, his voice was slowly coming back when I spoke with him on Monday. We aim to record on Tuesday afternoon and have a new episode ready for you all sometime on Wednesday (early morning or sometime in the evening).

We apologize for the lengthy delay in episodes. We miss the podcast, too! And Majik has A LOT of things he wants to talk about, so I imagine it’s particularly frustrating for him. Which only makes me chuckle.

If you’re missing your weekly doses of me and Majik, check us out on Twitter:

And I’ve got a blog:

And now so does Majik!

We’ll keep you posted about the next episode of Blessing of Frost, coming soon to a website near you!