So the nerfs have arrived and boy, is the blogosphere opinionated about this! We sort of have a guest this week. Katarnas (aka Kat) from the guild Otaku on the Chamber of Aspects (EU) realm and the blog Resto Is Epic asked us via email (at podcast [at] blessingoffrost.com!) if we’d be interested in his views on the nerfs as a very casual 10-man raider. We said sure, but because he’s in the UK, he’s five hours ahead of us and recording times this week just didn’t really pan out, so… he sent us an epic audio file of himself talking about the nerfs, chunks of which you’ll find included in this super-long episode! Like, very long. As in, nearly two hours in length. Don’t say we didn’t warn you!

At any rate, that was a new way of having a guest sort of on the show and we really appreciate Kat taking the time to record his thoughts and send them along!

First up, Choice of Skywall is still recruiting! A moonkin, a holy paladin, a holy priest, a mage and an elemental shaman would all be welcome additions to a fun raid team that is currently 1/7 25-man HM in Firelands. Check ’em out!

And now… blog reactions to the Great Firelands Nerfs, which are detailed in the Blizzard Hotfix notes:

Saunder from Non-Squishy Heals argues the nerfs are simply too much:
http://nonsquishyheals.blogspot.com/2011/09/me-and-my-big-mouth-and-nerfs.html

Fannon at dwarven battle medic writes of his raiding disappointment in an open letter to Blizzard:
http://battlemedic.blogspot.com/2011/09/on-raiding-disapointment-open-letter-to.html

Zelmaru of Murloc Parliament talks about how it’s way too much and way too late:
http://murlocparliament.com/2011/09/26/from-impossible-to-roflstomp-too-much-too-late

Juvenate at WTS Heals says that their Rag kill was bitter-sweet:
http://wtsheals.wordpress.com/2011/09/26/ragnaros-down-a-bitter-sweet-kill/

And, of course, Kat from Resto Is Epic has this to say along with what he said in the episode:
http://restoisepic.wordpress.com/2011/09/23/thoughts-after-being-in-a-nerfed-firelands-and-my-wol-debrief-41/

Finally, don’t forget to check out a great podcast in Convert to Raid. They spent a chunk of Episode 12 talking about the nerfs: http://converttoraid.com/2011/09/26/12-convert-to-raid-bazoobagwabo/

We would love to hear what you have to say! Email us at podcast [at] blessingoffrost.com with your thoughts, tips of the week or bumpers for the show or follow us (and tweet us!) on Twitter:

Finally please rate us up on iTunes! You’ll earn yourself a shout-out from one of us (5 stars for Kurn, 4 stars for Majik) at the end of the show if you rate us up and leave us a review!

Until next time, stay frosty!

Episode 34 is here and while it contains no bleeping, unlike last week, it does contain a bunch of information about Brewfest, which starts today!

Here’s a WoW Insider post that links a couple of other posts talking about the nerfs, which includes a link to Beru’s post. You may remember that Beru was our guest on  Episode 23 of Blessing of Frost, Legislation for a Legendary.

MMO Melting Pot had a few different round-ups of nerf-related posts. Of note is the link to Jasyla’s blog post about it. Jasyla, of course, raids with us in Apotheosis and she was a guest on Episode 28 of Blessing of Frost, Feeling Out Firelands.

And here are some handy-dandy Brewfest resources:

Wowhead’s guide to Brewfest – don’t forget that the comments on the individual achievements are almost always really helpful!

Wowpedia’s Brewfest entry – this is the one with the Alliance version of the Ram Racing image. Really great and detailed entry!

As always, we’re interested in what you have to say! Email us at podcast [at] blessingoffrost.com with your thoughts, tips of the week or bumpers for the show or follow us (and tweet us!) on Twitter:

Finally please rate us up on iTunes! You’ll earn yourself a shout-out from one of us (5 stars for Kurn, 4 stars for Majik) at the end of the show if you rate us up and leave us a review!

Right smack dab in the middle of recording Episode 33 of Blessing of Frost, I saw this on my Twitter feed: 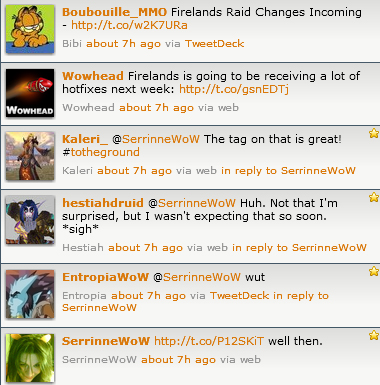 And so Majik and I decided to talk about the upcoming Firelands nerfs in this week’s episode.

With the final showdown against Deathwing approaching, we’ve been keeping a close eye on players’ progress through the current Firelands raid content. Before patch 4.3 is released, we want groups who are working on Heroic-difficulty content to be able to get as close to Ragnaros as possible, and we want players who are tackling normal progression to be able to experience as many of the encounters as they can. To achieve these goals, we’ll be toning down the difficulty of both normal and Heroic raids through hotfixes in the coming weeks. In general, we plan to reduce health and damage of all raid bosses in both normal and Heroic Firelands by around the same percentage we brought difficulty down for the original Cataclysm raids when Rage of the Firelands (patch 4.2) was released.

We’re looking forward to seeing more groups of players face off against the firelord in the weeks ahead. However, before we make these changes, we want to give everyone a final shot at the bosses at their current difficulty level — so this is a heads up that we’re planning to apply the difficulty hotfixes beginning the week of September 19.

Stay tuned to the Patch 4.2 Hotfixes blog for these and other live updates to the game as they happen.

What do you think about the nerfs? Let us know at podcast [at] blessingoffrost.com or vote in our poll:

Apotheosis is looking for a TANK, check us out at http://www.apotheosis-now.com/main/!

Choice of Skywall is looking for HEALERS and some DPS, check them out at http://www.choiceguild.com/!

And please rate us up on iTunes! If you give us a review and a high rating, we’ll read your name and comment out on the show in the Shout-outs section! Four stars will get you a shout-out from Majik, five-stars gets you one from me!

Don’t forget, we’re still accepting bumpers for the show, hit us up at podcast [at] blessingoffrost.com and if we like ’em, we’ll use them in the show!

Episode 32 is here and brings with it some, er, “engaging” news in Majik’s life. We also have our first-ever show with two guests, Kaleri and Sara (who was previously on Episode 21 of Blessing of Frost) and we discuss chronic diseases (in particular, Crohn’s Disease and Multiple Sclerosis) in the context of World of Warcraft and how players with these conditions are affected by WoW or how their WoW playing is affected by their conditions.

The Dev Watercooler post with the signoff: “Greg ‘Ghostcrawler’ Street is the lead systems designer for World of Warcraft and he probably listens to your podcast.” This spawned the new segment we call “Dear Ghostcrawler…”

Apotheosis of Eldre’Thalas is seeking a tank! Prefer a warrior or a paladin, perhaps an exceptional DK or druid, but honestly, the Vanquisher token people might kill us for adding another person to their token. Apply now!

But You Don’t Look Sick!

Sara’s Twitter: @SerrinneWoW – she especially would love to hear from you if you’re a WoW player who’s also been diagnosed with MS!

Information links for Multiple Sclerosis, including where you can make a charitable donation:

Information links for Crohn’s Disease, including where you can make a charitable donation:

People voted for Majik to get a Twitter, so he did! Follow him @Majjity, @kurnmogh and @ApotheosisET on Twitter and please rate us up on iTunes! If you give us a review and a high rating, we’ll read your name and comment out on the show in the Shout-outs section. 🙂

Jeopardy! “Think” music remains the property of Merv Griffin and Jeopardy Productions, Incorporated. No offense intended and no money is being made from this podcast. Please don’t sue us. We love Alex Trebek and your show!