Well, what started out as a crazy idea in late 2010 spawned 75 episodes, and now Blessing of Frost’s last episode is finally here. Doubling as our second anniversary episode, we take a look back at some hilarious moments in Blessing of Frost history.

Thank you to all our listeners, guests, contributors, those who rated us up on iTunes and those who sent in MOLL-E questions. We never would have made it past ten episodes without you.

Episode 42: Awesome Anniversary. This is where the legend of BeruLust began. Beru, Vidyala and Stoneybaby joined us for this one.

Episode 48: Nerfs and Power Outages. Great episode where Majik loses power mid-podcast. And also says that he’s an idiot. Gina from healbot.net is our guest.

Episode 49: A Raid Retrospective. Just a short clip from this episode where Jasyla joined us to chat about past raids.

Episode 59: Babbling about Bonuses. Some amazing clips from this episode, including the entire intro, pretty much.

Episode 60: Pricey Purchases. Ice cream and complaining about my brother and Majik. An excellent few clips.

Episode 61: How-To Heroic Dragon Soul. Ladies and gentlemen, behold the tale of the weeeeeeeeezard. (Some weeeeezard clips in the episode were not included in Episode 75, so be sure to check this one out again.)

Episode 63: Diablo the WoW Killer? This is probably one of the best episodes we’ve produced in the last year. Hilarious.

And here, now, are The NPA Files. They are a series of six videos we made back in, oh, 2007. Careful, the first one has Majik being pretty yelly.

Finally, please do check out Choice at choiceguild.com and Apotheosis at apotheosis-now.com.

Thanks to you all for listening. #stayfrosty!

Yes, ladies and gentlemen, Episode 74 is our penultimate episode. We’ll be ending Blessing of Frost with Episode 75, due out in a couple of weeks. In the meantime, this is your last opportunity to drop us a line at podcast (at) blessingoffrost.com or rate us up on iTunes for a shoutout!

Majik showed me this video that takes the concept of “turducken” to the extreme. Warning, I nearly puked.

Lisa Whelchel played Blair Warner on the 80s sitcom The Facts of Life and is on Season 25 of Survivor.

Here’s a great list of all the chat commands you can use in WoW chat channels (the advanced chat channel usage section is really nifty):

Don’t forget, this is your last chance to rate us up on iTunes and get a shoutout on the podcast in return. And please do send us your questions or comments to podcast [at] blessingoffrost [dot] com!

Finally, Episode 73 of Blessing of Frost is out! This week, we talk a bit about what to expect in 5.1, especially the Brawler’s Guild feature.


The Cinder Kitten is actually really cute and Blizzard will take 100% of the proceeds of the sale and donate them to the American Red Cross to help those in need, such as those who were affected by Hurricane Sandy. You can donate at the Red Cross site without purchasing a Cinder Kitten at redcross.org. Even if you don’t live in the US, consider a small donation to your local Red Cross or equivalent!

Ghostcrawler tweeted with Kurn the other day, about Holy Avenger and holy paladins.

The first-ever rare Kurn and Majik camped specifically for a drop was Prince Nazjak and the item was the Tidal Charm.

The Torch of the Damned is a pretty sweet-looking 2H mace that drops of Reliquary of Souls in Black Temple.

And if you’re curious about why Kurn’s quitting (although if you’ve listened to the podcast since, like, Firelands, you shouldn’t be all that curious), you can read her related blog posts starting here.

As you may or may not be aware, a hurricane swept along the Eastern United States, which is where Majik lives. As such, he has been without power since Monday and so Episode 73 will be delayed until such time as he has power restored and our schedules allow for it. This could be as late as next week.

We do apologize for the delay, but hey, definitely take this opportunity to write to us at podcast (at) blessingoffrost.com and ask your questions and send us your comments all for our MOLL-E section!

As always, thanks for your patience! We hope to get Episode 73 out to you soon!

If you’re wondering about the whole “have some birds”/”have some bees” thing, go watch Round 2 of the Majik vs. Kurn Magicka death match. http://www.youtube.com/watch?v=8H5P9VVgSEc (warning, language NSFW)

And in case you missed how lame the Theramore Scenario was, witness Maj, Kurn and Mhoe doing it at 85. http://www.youtube.com/watch?v=7QykkU0Ph64 (warning, language NSFW)

As a correction, Apotheosis is now actually 5/6 in normal Mogu’shan Vaults, having defeated Elegon on Sunday, October 21st.

Speaking of which, the WoW dragon Elegon is likely named for Ellegon, who is the primary dragon in the Guardians of the Flame series by Joel Rosenberg. (Spoilers abound!)

Beru talks about her disappointment with world bosses.

Vidyala talks about Pandarian experiences with Golden Lotuses and Valley of the Four Winds.

As usual, Maj and I turned to El’s Professions to quickly level inscription. (And El’s Extreme Anglin’ is a great site for all sorts of fishing news and info.)

Finally, MMO Melting Pot, as usual, has some great round-up posts you should read:

Thanks to all those who tweeted us about their favourite/least favourite things to do in Mists! (Apologies if I’ve missed you!) Please do give them a follow:

Just a note to let you guys know that Episode 72 was supposed to be recorded tonight (Monday, October 15th) but will instead be recorded on the evening of Thursday, October 18th, due in part to Kurn’s bronchitis. The amount of coughing she would have to edit out of the show would have taken WAY too much effort. 😉

In the meantime, RATE US UP on iTunes, you slackers! And send us mail! We love mail for our MOLL-E segment. You can reach us at podcast [at] blessingoffrost [dot] com.

Ladies and gentlemen, Episode 71 is here just in time for the Mists of Pandaria launch! Good luck to everyone and make sure you stay healthy even if you’re planning to play as soon as it launches!

Kurn’s off to Italy for a couple of weeks, so we’ll be back either the week of October 8th (unlikely) or October 15th (much more likely).

And back to WoW stuff… Our guildie Serrath borrowed some space from our guildie/GM Jasyla at her blog, Cannot Be Tamed and wrote up an awesome guide on how to stay healthy while playing for extended periods of time: http://www.cannotbetamed.com/2012/09/05/gaming-marathons-the-healthy-way/

Here’s the Daily Blink Majik was talking about: http://www.thedailyblink.com/2012/09/when-we-merge-servers-we-really-merge-servers/

Here’s the link for the Dev Chat summary: http://www.mmo-champion.com/content/2932-Best-Buy-Developer-Q-A

Curious about AIE (the guild Rho’s a part of, with 8000 members?) on Earthen Ring US (Horde)? Check out their very own wiki here for more info: http://wiki.aie-guild.org/index.php?title=Main_Page

Finally, here’s Maj and Kurn (and Mhoe from Apotheosis) doing the Theramore scenario. Language is NOT safe for work!

5.0.4 hit on August 28th and changed the game significantly. In this episode, we chat with Amowrath of the blog Light’s Wrath and the guild Undying Resolution (US-Elune).

Herald of the Titans link at Wowhead 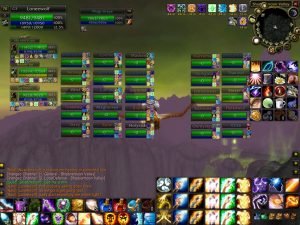 Kurn’s shoutout for the week is to Rho (@RhoWoW) of the Realm Maintenance podcast! Check it out at http://www.realm-maintenance.com!

Of course, check out Amowrath on Twitter as well, @AmoHeals and on his blog, Light’s Wrath!

As always, please rate us up on iTunes and shower us with love in your review — and you get a shoutout on the podcast in return.

Yet another episode of Blessing of Frost has arrived and this time, Kurn and Majik talk about the impending arrival of Patch 5.0.4, which hits today, Tuesday, August 28th, 2012.

First of all, please enter our contest for a Lil’ XT pet (possibly US realms only?)! Just send us your comments or questions to podcast (at) blessingoffrost.com before 11:59pm ET (GMT-4) on Saturday, September 1st and you’re eligible to win! The best comment or question (as judged by myself and Majik) will win! In the case of two really good choices, we may also give away a Papa Hummel’s Old-Fashioned Pet Biscuit (courtesy of Jacii, ex-GM of Sometimes There is Fire of Icecrown). Hope to see your submissions!

Second of all, that guild stuff that happened can be read about at Jasyla’s blog and at my own blog.